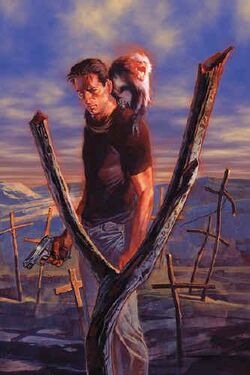 Yorick becomes the last man on Earth. Yorick was somehow able to withstand a planet-wide virus that killed all other males.

While on the run from ninjas, spies and clans of killer females, Yorick Brown, seemingly the last man on Earth, is on a path with his fateful pet monkey, Ampersand, to find his girlfriend, Beth in the Australian outback.

As the only man on the planet, Yorick had to constantly hide his identity out of fear of what would happen if he was found out.

Retrieved from "https://vertigo.fandom.com/wiki/Yorick_Brown?oldid=6377"
Community content is available under CC-BY-SA unless otherwise noted.