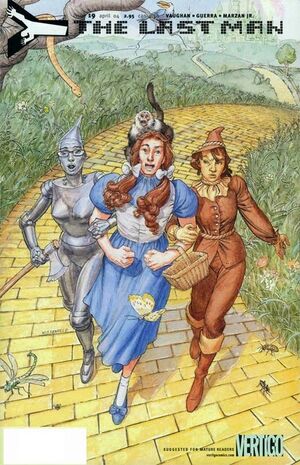 711's interrogation of Yorick results in him telling her about his first time with his girlfriend Beth, being molested by an older boy as a child, and witnessing the first horrifying thing he saw minutes after the gendercide plague struck. Finally he confesses that, despite his vow to remain faithful to Beth until they are reunited no matter how long that could take, he wants to have sex with 711.

Retrieved from "https://vertigo.fandom.com/wiki/Y:_The_Last_Man_Vol_1_19?oldid=3387"
Community content is available under CC-BY-SA unless otherwise noted.