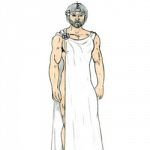 History of character is unknown.

Claude DeCastilane has the ability of clairvoyance, precognition and retrocognition.

He has the ability to see various points into the future or the past. Whether it be a glimpse mere moments in advance or events days in advance or for past vision, he can see years and sometime centuries into the past.

Claude can also manifest a physical side to his precognitive powers, sometime future events will appear as writing or pictographs all over his naked body. The writing or pictures will later either fade away or change depending on the outcome of events.

Claude has the strength level of a man his age who engages in semi-regular excersize.

In very cold situations, his penis will shrink to a very small size, which makes reading prediction that appear on the organ hard to decipher.

Retrieved from "https://vertigo.fandom.com/wiki/User:DeCastilane?oldid=6712"
Community content is available under CC-BY-SA unless otherwise noted.