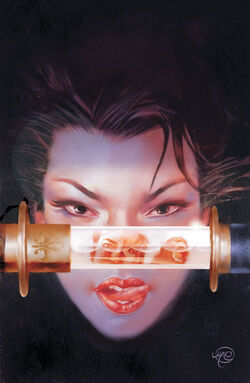 Hair
Black
Base of Operations
Japan (though largely mobile)

Toyota is an assassin.

The assassin known as Toyota was orphaned at a young age, when her parents died in the 1983 tsunami which devastated the Japanese island of Hokkaidō[1]. Years later, she broke into the laboratory of Doctor Matsumori looking for drugs. Matsumori took the opportunity to recruit her as his own personal assassin. Since then, she has performed numerous jobs for him. While on a mission to locate the capuchin Ampersand, who once belonged to Matsumori, but was now in the possession of Yorick Brown, she came into conflict with Agent 355. Although she succeeded in kidnapping Ampersand[2], Matsumori's daughter Allison was able to help Yorick and 355 track Ampersand down. In a final confrontation, Toyota was killed in a death duel with 355[3].

Retrieved from "https://vertigo.fandom.com/wiki/Toyota?oldid=6241"
Community content is available under CC-BY-SA unless otherwise noted.