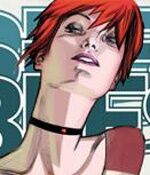 Rose Red is the wild and rebellious twin sister of Snow White. She has a long romantic history, as she slept with Prince Charming, dated Jack Horner, was briefly the fiance of Bluebeard, and the wife of Sinbad.

She is best known for faking her death with the help of Jack Horner to avoid getting married to Bluebeard. She is conniving and unpredictable. Her marriage with Sinbad ended when she became distraught over the condition of Boy Blue, after his time serving in the war. Despite the fact that he previously was interested in her, he rejected her due to her constant need for excitement.

After she discovered Boy Blue's death and when dealing with his rejection, Rose Red underwent a serious depression where she would not leave her bed.

Rose Red was also part of Snow White's story, but has now been forgotten by Mundys. But she also appeared in the story Snow White and Rose Red (a fable she has not been left out of now) and it goes as follows:

Snow-White and Rose Red are two little girls who live with their poor widow mother in a small cottage. They are very good little girls; they love each other dearly; and their mother is very fond of them. Rose Red is outspoken and cheerful while Snow White is quiet and shy.

One winter night, there is a knock at the door. Rose Red opens the door to find a bear. At first, she is terrified, but the bear tells her not to be afraid. "I'm half frozen and I merely want to warm up a little at your place," he says. They let the bear in, and he lies down in front of the fire. Snow White and Rose Red beat the snow off the bear, and they quickly become quite friendly with him. They play with the bear and roll him around playfully. They let the bear spend the night in front of the fire; and, in the morning, he leaves, trotting out into the woods. The bear comes back every night for the rest of that winter, and the family grows used to him.

When summer comes, the bear tells them that he must go away for a while to guard his treasure from a wicked dwarf. During the summer, when the girls are walking through the forest, they find a dwarf whose beard is stuck in a tree. The girls rescue him by cutting his beard free, but the dwarf is ungrateful and yells at them for cutting his beautiful beard. The girls encounter the dwarf several times that summer, rescue him from some peril each time, and the dwarf is ungrateful each time. Then one day, they meet the dwarf once again; this time, he is terrified because the bear is about to kill him. The dwarf pleads with the bear, begs it to eat the girls instead; but the bear pays no heed and kills the dwarf with one swipe of his paw. Instantly, the bear turns into a prince. The dwarf had bewitched the prince by stealing his gold and turning him into a bear, but the curse is broken with the death of the dwarf. Snow White marries the prince, and Rose Red marries his brother.