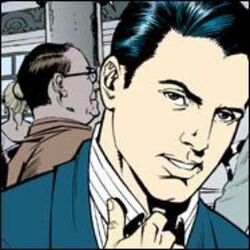 Hair
Black
Base of Operations
Fabletown

Prince Charming married Snow White, having been genuinely in love with her for a while, but was eventually unfaithful to her with Rose Red, Snow’s sister. (He claimed that he was seduced.)

Snow divorced him and he married Briar Rose, then divorced her under unrevealed circumstances and finally married Cinderella. During this period, Charming’s land and castles in the homelands were swallowed up by the Anniversary’s forces, leading Charming (with Cinderella in tow) to seek refuge and escape at the Last Castle. Being a married man, Charming was able to leave the castle before the final stand – but apparently divorced Cinderella soon afterwards.

As if this wasn’t enough trouble for the inhabitants – who were promised endless and free magical transformations by Charming, who didn’t bother to check if this was possible – the forces of the Adversary invaded Fabletown. Charming, who had some military experience, helped to lead the defenders on the streets and fought bravely. Despite being saved, along with everyone else, by Bigby, Charming continued his campaign to be Mayor…finally winning the election. His first attempt at acting on his campaign promises proved to be a total disaster – it turned out that the witches of Fabletown couldn’t handle even a small number of spells.

Despite some assistance from Beauty (deputy mayor) and the Beast (Sheriff), Charming’s first year in office bounced from crisis to crisis, from an invisible murderer to an invasion by Arabian fables. Charming was almost totally ineffectual during this crisis. He sent out a search for Bigby, who had left Fabletown and had suddenly become very hard to find.

Prince Charming stepped down from his position as Mayor, returning King Cole to mayorship, to become commander of the war effort. He rode on the ship that flew through the Homelands, The Glory of Baghdad, as commander of the army (while Sinbad was the captain of the ship). They effectively destroyed all but one of the gates between the Homelands and other worlds before The Glory was destroyed. Charming was severely burned in the burning of The Glory, but he and Sinbad still took the final bomb to the last gate. Charming was the one to activate it (as Sinbad didn't know how) and could not escape the blast.

Charming is actually from more than one story. He is the unnamed prince of the stories of Cinderella, Sleeping Beauty, and Snow White and the Seven Dwarves.

Retrieved from "https://vertigo.fandom.com/wiki/Prince_Charming?oldid=5463"
Community content is available under CC-BY-SA unless otherwise noted.