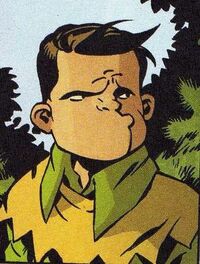 Pinocchio is one of the Fabletown characters who fled to the mundane world and settled in New York City. He is furious with the Blue Fairy because she turned him into a real boy who would never grow into a man. He is the son of Geppetto.

Retrieved from "https://vertigo.fandom.com/wiki/Pinocchio?oldid=5581"
Community content is available under CC-BY-SA unless otherwise noted.