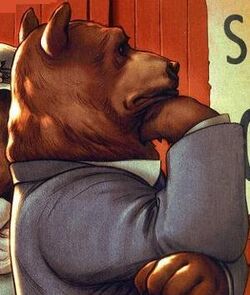 Papa Bear is the husband to Mamma Bear and the father of Boo Bear. 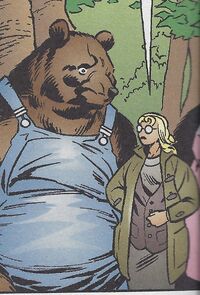 He was sentenced to one hundred years of hard labor on the Farm for being part of the rebellion.

He, along with Mamma Bear and Boo Bear volunteered to help fight the wooden soldiers in Fabletown. Papa Bear was badly injured and Boo Bear was killed. Mamma Bear became pregnant shortly after this as their story is a popular fable.

In the story of "Goldilocks and the Three Bears" the Three Bears leave their house to take a walk. When they return they find a girl, Goldilocks, had tried their porridge, sat in their chairs, and laid in their beds.

Retrieved from "https://vertigo.fandom.com/wiki/Papa_Bear?oldid=5458"
Community content is available under CC-BY-SA unless otherwise noted.