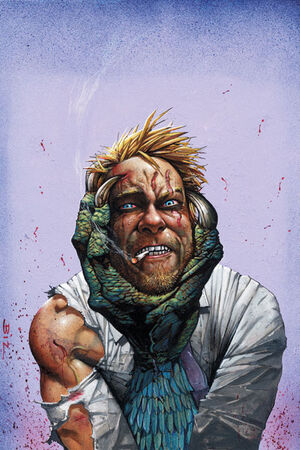 John fights for his life against the demon Gemma has summoned. But John realizes that he actually fears for his life, something he has never done; because he is worried about being without Epiphany.

Meanwhile, Epiphany is at Chas' wondering where John has gone when Gemma shows up. She confesses what she has done and her and Epiphany go to save John. Along the way Epiphany figures out what happened and Gemma realizes it wasn't her uncle who raped her, but his demon self. When they arrive John has already defeated the monster... or so he thought. When the demon arrives Epiphany sprays what she had made into the demons mouth and John threw a thumb into the demon's mouth, and it died. Gemma leaves, still angry with John.

Retrieved from "https://vertigo.fandom.com/wiki/Hellblazer_Vol_1_281?oldid=5866"
Community content is available under CC-BY-SA unless otherwise noted.