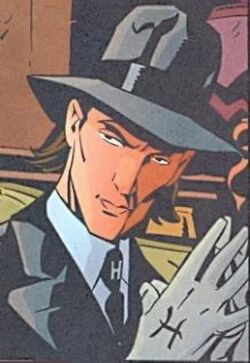 Hansel works for the Adversary. As a small child in the Homelands he had wandered into Frau Totenkinder's cottage. He is the burner of the Empire's unauthorized witches, as he is deeply religious. He killed his siter Gretel because she was learning magic from Frau Totenkinder.

He returned to the Homelands where he became the Head of the Imperial Inquistion for the Adversary. He is later sent to Fabletown , officially as an envoy, but really to recover Baba Yaga and the wooden soldiers. He is unsuccessful, as Prince Charming is aware of his real plan. But he is allowed to stay in the Mundy world, as the official envoy.

Later, when he tries to kidnap Pinocchio he is stopped by Cinderella, who shoots him in both knees (as she is unsure if he is still the Fabletown envoy, and so unsure if he has immunity).

In the Great Fable Crossover he is summoned by Kevin Thorn to help him think of a good way to start over with the world. Hansel recommends beating his twin brother, Writer's Block, to death so he can get a moment of peace and quite to think. Thorn takes his advice and does just that. But Hansel is pushed off a cliff by Old Sam who disapproves of Hansel's violent methods.

In the tale of Hansel and Gretel, Hansel and Gretel's parents are very poor and so have decided to take the children out into the woods (their father had been pushed into the decision by his wife, the children's stepmother), build them a fire and leave them there so they no longer have to care for them. But, Hansel and Gretel over heard this plan and Hansel decided to collect pebbles that he would drop along the way so they could find their way back home. Before the children go to sleep he tells Gretel "Be comforted, dear sister, and sleep in peace; God will not forsake us." The next morning they are taken out into the woods--Hansel carrying the pebbles and Gretel carrying bread (the last meal their parents will give to them). So after a long while the children are able to make it back to the house.

But they are taken back out into the woods again, and this time Hansel is unable to collect pebbles, so instead Hansel uses his bread and crumbles it and leaves a trail with it. But in the night birds eat their breadcrumb trail and are unable to find their way home. So they wander in deeper and deeper into the woods, and eventually they come upon a candy cottage, and they plan to feast upon it. As they begin to eat a sweet voice calls out to them but they continue to eat. While they were eating the house a very old woman on crutches came out. The woman invites them in. The old lady was very nice to them but really she was a witch and planned to cook them and eat them. But when she starts the fire in her oven she tells Gretel to check it to see if it is hot enough. Gretel realizes this and lies and tells the witch that she does not know how to check it. The witch tells her that the opening is very big and that even the witch herself could fit in it. When she comes close to the oven to prove it Gretel shove her in and closes the door. Hansel and Gretel found pearls in the witches house and so they brought them home and all their sorrows were ended.