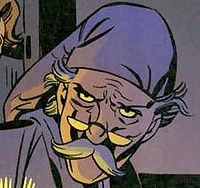 Before he was replaced by Mister Dark, Geppetto was the main antagonist of Fables, as he masterminded the conquest of the Fable Homelands. He is the creator of Pinocchio, who at first does not realize that he is the Adversary and the Emperor is simply a figurehead.

Geppetto created Pinocchio but after the Blue Fairy turned him human, Geppetto was disturbed by Pinocchio leaving him at home to go on adventures. He began to make more children, initially older sons who would be more mature, and then daughters. He and the Blue Fairy allied closely.

Geppetto was approached by the people of his community to create a wooden version of the Count of the kingdom, whose behavior was frightening the community, and then eventually have the Blue Fairy turn the double human, so that the Count could be gotten rid of and replaced by the new version. Eventually, Geppetto was replacing many highly ruling magistrates with wooden doubles who the Blue Fairy turned human. Afraid that his co-conspirators would reveal him, he also realized that he had become an emperor, since he had put in place every new ruling leader.

Geppetto was originally uninterested in Fabletown but his empire had already absorbed it and many of the fables had escaped to the mundane world. His imperial envoy to Fabletown was Baba Yaga, disguised as Red Riding Hood. He had another interaction with Fabletown when Boy Blue decapitated one of his wooden kings and he was held by Snow Queen and brought to Geppetto. He attempted to kill Geppetto but failed. When Bigby Wolf broke into his cottage and invaded the Homelands, his hatred for Fabletown grew.

Geppetto realized that Mister Dark posed a threat to him but Mister Dark eventually overthrew him, and he is now shown as a kinder person. He became an advisor to Rose Red at the farm with the intention of ousting Mister Dark.

Retrieved from "https://vertigo.fandom.com/wiki/Geppetto?oldid=6645"
Community content is available under CC-BY-SA unless otherwise noted.