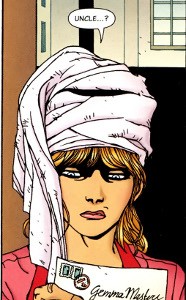 Citizenship
British
Marital Status
Single
Current Residence
London, England
Relatives
Tony Masters, father
Cheryl Masters, mother
John Constantine, uncle
Epiphany Greaves, aunt
First Appearance
Hellblazer #4
Gemma Masters is the daughter of Tony and Cheryl Masters and niece of John Constantine. She is an orphan. She was a practicing magician, much to the dislike of her uncle.

She had given up magic and went to counseling, but got an invitation to her uncle's wedding. She decided to attend, even though she was unsure about it. After the wedding Gemma was raped by Demon John, though Gemma thought it was her uncle. After this she gets a witch to help her summon a demon to attack her uncle. But after her uncle does fall into her trap to have to fight the demon she runs to Epiphany. She tells Epiphany what had happened, how John had raped her. But Epiphany knew that it had been Demon John at the wedding and tells Gemma so. They go to Epiphany's lab and grab a concotion that Epiphany had made. Then Gemma and Epiphany go find John. When they arrive John has already defeated the demon, or so he thought. The demon comes back and Gemma sprays the concoction in the demon's mouth. Afterwards Gemma informs John that her being raped was still John's fault because it was another one of his tricks that always ends up her people, and this time the person being hurt was her.

Gemma starts sleeping with Terry Greaves to blackmail John into going to Hell to find out what she saw her mum crying about when she was little. John goes and discovers that Gemma has an older half-brother that Cheryl never told anyone about. But when John tells Gemma this is what he discovered she believes he is lying to her.

Retrieved from "https://vertigo.fandom.com/wiki/Gemma_Masters?oldid=6101"
Community content is available under CC-BY-SA unless otherwise noted.