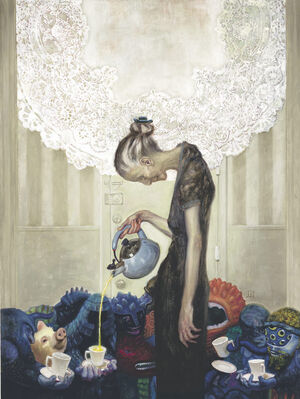 Boy Blue and Flycatcher simulate the crime scene in the identical apartment of Rose Red's in the apartment downstairs. Meanwhile, Snow White visits King Cole and gives an update on the investigation.

The investigation continues and there is still no clear murderer, but it is confirmed; the amount of blood in Rose Red's apartment is too much for her to be alive.

Retrieved from "https://vertigo.fandom.com/wiki/Fables_Vol_1_3?oldid=4918"
Community content is available under CC-BY-SA unless otherwise noted.