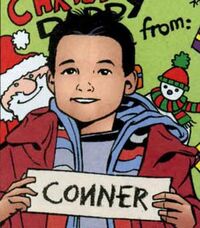 Conner is one of the seven cubs of Snow White and Bigby Wolf. He is shown as having short black hair and slightly resembling Prince Charming, although his father is Bigby Wolf. He has a dominant personality and a "leader" mentality, and is very similar in personality to his brother Darien.

Retrieved from "https://vertigo.fandom.com/wiki/Conner?oldid=5556"
Community content is available under CC-BY-SA unless otherwise noted.