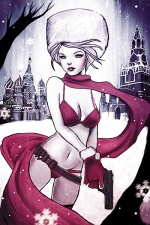 Cinderella was the third wife of Prince Charming. She is immortal, and although she works at a shoestore called the Glass Slipper, she also works as a secret agent for the sheriff, once Bigby Wolf and later The Beast. She has seduced Ichabod Crane to get him to reveal his willingness to turn traitor and helped with the interrogation of Baba Yaga.

Retrieved from "https://vertigo.fandom.com/wiki/Cinderella?oldid=5325"
Community content is available under CC-BY-SA unless otherwise noted.