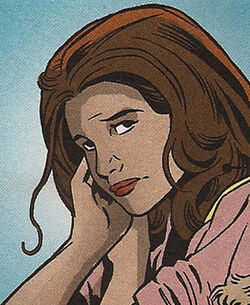 Briar Rose was the second wife of Prince Charming. She is extremely wealthy but any prick on her finger leads to a long sleep that can only be broken by a kiss from a prince who genuinely loves her. It also sends everyone around her into a sleep. One time, she was awoken by a police dog named Prince. She must wear gloves all the time to prevent getting pricked.

Briar Rose caused the entire capital city of the Empire to fall asleep when she pricked her finger; allowing for the final take over of the Empire by Fabletown. She remained asleep until she was awoken by Ali Baba[2].

Briar Rose has expressed resentment over the fact over the hundreds of times she has been awaken by "true lovev's kiss" she has never actually found her true love; someone that will stay with her forever[3].

Retrieved from "https://vertigo.fandom.com/wiki/Briar_Rose?oldid=5604"
Community content is available under CC-BY-SA unless otherwise noted.