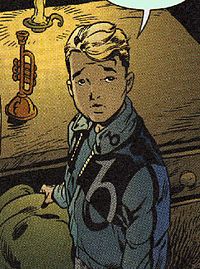 Boy Blue is a character in the Fables comic books. He begins as a meek office clerk helping Snow White run Fabletown. He is a skilled jazz musician but has trouble getting gigs in Harlem due to his race and appearance.

Boy Blue has an incident with Little Red Riding Hood when she approaches him and they sleep together, only for him to realize she is actually Baba Yaga in disguise. She winds up breaking all of his fingers in an interrogation. He eventually gets back full use of his hands thanks to Dr. Swineheart.

When Boy Blue fights in the war he is shot with an arrow. Before the war, he had made advances toward Rose Red, who, after the war, wanted to get back together with him after divorcing her husband Sinbad. Due to the arrow wound, Boy Blue died shortly after the war.

Boy Blue is from the nursery that goes as follows:

Little Boy Blue,
Come blow your horn,
The sheep's in the meadow,
The cow's in the corn;
Where is that boy
Who looks after the sheep?
Under the haystack
Fast asleep.
Will you wake him?
Oh no, not I,
For if I do
He will surely cry.

Retrieved from "https://vertigo.fandom.com/wiki/Boy_Blue?oldid=5551"
Community content is available under CC-BY-SA unless otherwise noted.