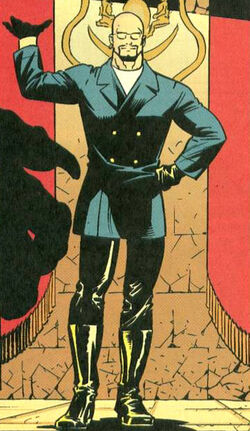 Bluebeard was a very rich member of the Fabletown community. He was killed and thrown down the Witching Well. When Ambrose came through with him; Bluebeard and Shere Khan planned to betray Ambrose once they returned to the Homelands. Ambrose knew this but kept them with him anyway. When they went to make their betrayl Ambrose took away what had been keeping them substantial. They then betrayed Ambrose to the Adversary.

Bluebeard is from a French fable telling the story of a young woman who marries a wealthy aristocrat who had several wives beofre her but no one knows what happened to them. The aristocrat is thought ugly because of his blue beard.

One day the aristocrat announces he is leaving for a trip and he gives his new wife the keys to all the rooms in his house and says to use them freely. Then he gives her one more key and says not to use this one. She vows not to, but as soon as she leaves she goes and opens the door. To her horror she finds the room awash with blood and his other wives bodies. In her surprise she drops the key in blood, and then can't wash the blood off.

The new wife is the sole inheritor to the aristocrats money and gives her sister money for a dowry and her brother money for her brothers' captains commisions. She marries a worthy gentleman.

Retrieved from "https://vertigo.fandom.com/wiki/Bluebeard?oldid=6067"
Community content is available under CC-BY-SA unless otherwise noted.