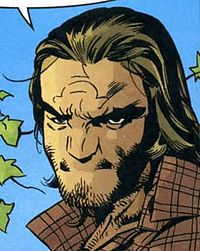 Bigby Wolf is a Fables character, a reformed version of the Big Bad Wolf of the Little Red Riding Hood story. In Fables, he is able to take on a human form.

Bigby is the son of Winter and Mr. North (or the North Wind). Being the runt of the litter, he felt forced to prove himself to his six brothers and sisters, and wound up devouring the grandmother in the Little Red Riding Hood story. After this, he vowed only to pray on humans, but eventually traced down his estranged father, the North Wind, and wound up trying to kill him seven times. When the Adversary's armies came into his world, Bigby Wolf was outraged.

Bigby became sheriff upon coming to the New World. He was sheriff of Fabletown when Prince Charming becomes mayor but chooses to resign due to his dislike of Prince Charming, so Beast became the new sheriff. Cinderella was an agent of his.

When Snow White and he were drugged by Bluebeard Snow became pregnant with Bigby's children. She had seven "cubs" (though she originally thought she only had six). They eventually married and moved into Wolf Valley.

Bigby Wolf encountered Snow White and Rose Red as captives, and freed them[1]. When he went into exile, Snow White visited him and stabbed him with a knife that contained wereworlf blood, giving him the ability to take on human form, since he would have to pass as a human in order not to get killed by the Adversary's army. They have seven children, are married and live in Wolf Valley.

The North Wind is Bigby's father, but he is seen to not get along with Mr. North. Bigby tolerates him only for the sake of his children.

Bigby is from multiple fables, including "Little Red Riding Hood" and "The Three Little Pigs".

Retrieved from "https://vertigo.fandom.com/wiki/Bigby_Wolf?oldid=6559"
Community content is available under CC-BY-SA unless otherwise noted.