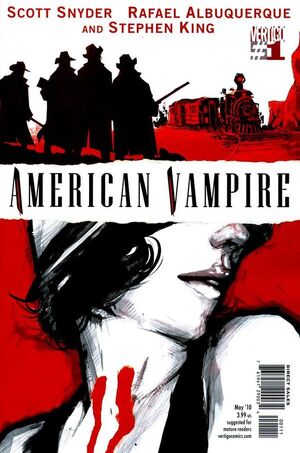 It is July 1925 in California. Pearl Jones and her friend Hattie Hargrove are aspiring actresses. They are invited to a party being thrown by direct B.D. Boch... but he turns out to be a vampire and might not be looking for a party...

In 1925, Will Bunting recounts the events of 1880. Bunting was present when Skinner Sweet, along with his partners Ronnie Jeeks and the Blackmouth Twins, was arrested for the robbery of Mr. Percy's bank and were being taken via train to be hanged. But the train is crashed but Sweet and his associates. Percy attacks Sweet, leaving him for dead. But a drop of Percy's blood on his eye will change Sweet's life forever.

Retrieved from "https://vertigo.fandom.com/wiki/American_Vampire_Vol_1_1?oldid=5667"
Community content is available under CC-BY-SA unless otherwise noted.