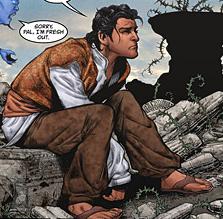 Ali Baba was thrown out of The Glory of Baghdad after being found as a stowaway. While stuck in the Homelands he wakes Briar Rose from sleep after she is kidnapped by goblins, so that he can have her riches (on the advice of Jonah Panghammer ); in the process he wakes the Snow Queen[1]. He began to fall in love with the Snow Queen after staying at her palace[2].

He is briefly seen being killed in Fairest in All The Land Graphic Novel, when Goldilocks targets women Fables. During the events of Fairest in All the Land he and Lumi (AKA the Snow Queen) are killed by Goldilocks, only for Cinderella to save Lumi at the expense of choosing to let him stay dead.

Retrieved from "https://vertigo.fandom.com/wiki/Ali_Baba?oldid=6631"
Community content is available under CC-BY-SA unless otherwise noted.