For past polls see the poll archive. 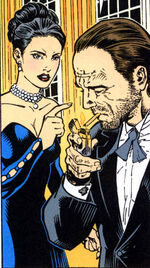 Snow and Bigby Wolf, the fairy tale creatures Snow White and the Big Bad Wolf, were the Deputy Mayor and Sheriff respectively for centuries of Fabletown. Snow ran Fabletown (as King Cole didn't do much) and Bigby handled all the investigations and he was the Spymaster.

Snow became pregnant with Bigby's child when they were under a spell placed on them by Bigby. Snow blamed Bigby initially but they eventually reconciled. Snow didn't have one child, she had seven, only one of which looked human so she was banished to the Farm, somewhere Bigby was forbidden from going. But eventually they found a way to work it out and they were married.

Retrieved from "https://vertigo.fandom.com/wiki/Vertigo_Comics_Wiki?oldid=6423"
Community content is available under CC-BY-SA unless otherwise noted.